Okay, this may be my favourite subject. In some ways a guilty pleasure because comic books are still for geeks or the illiterate. For those of you who haven’t spent time in really good comic book stores, the below examples will hopefully improve your status anxiety and increase the respect for the work of illustrators and their writers.
The seven examples are all from my personal collection and I consider them precious because they have influenced the perception of landscapes and related experiences. When I walk into a comic store to explore new series, I search for those books that make my jaw drop in admiration. A comic book is in many ways similar to a visual movie script, without the sound effects and with a montage that is variable, depending on the time that my eyes need to scan the pictures. My children mostly scan a new book without so much glancing at the text. Only in second instance, they start to engage in the plot that is deepened by text. In the meantime they enjoy the atmosphere by the colours and suggestive depth, by the character emotions and by the change of perspective. Let me guide you through these examples: 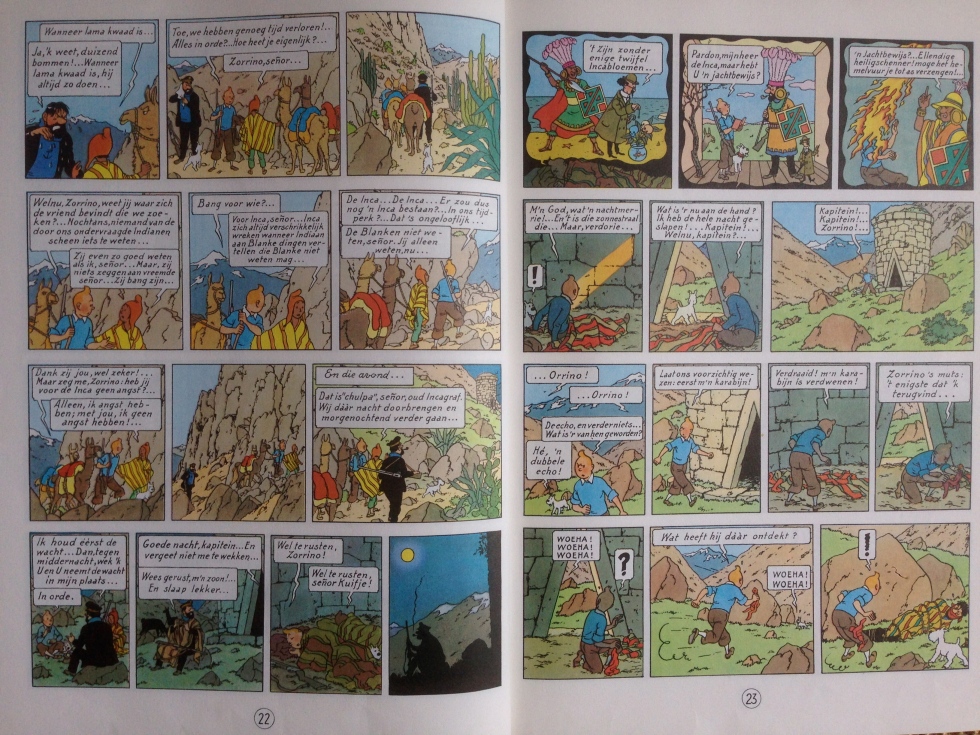 Tintin (Kuifje, in Dutch) by Hergé, de zonnetempel, Casterman 1949 (p. 22, 23)
The writer and illustrator Hergé has inspired many to join and discover the  diversity of cultures on this planet. On these two pages the time changes from afternoon, to evening, to nightfall (with nightmares) and the following morning. That is incredibly fast for only 26 picture frames! This is shown in respectably a diverse set of emotions and almost casual change of colour, walking gestures, relaxed evening pose, restful sleeppose, watchful watch pose, conflicting nightmare digestion, sudden wake, worried search and finally an unexpected surprise. All this happens to the main characters, while being in a landscape that is mostly desolate, with light traces of civilisation. I find this extremely emphatic and realistic, as well as adventurous and heroic. The laps in time make me, as a designer of landscapes, aware of the diverse experiences one can have while hiking, spending the night and waking up. 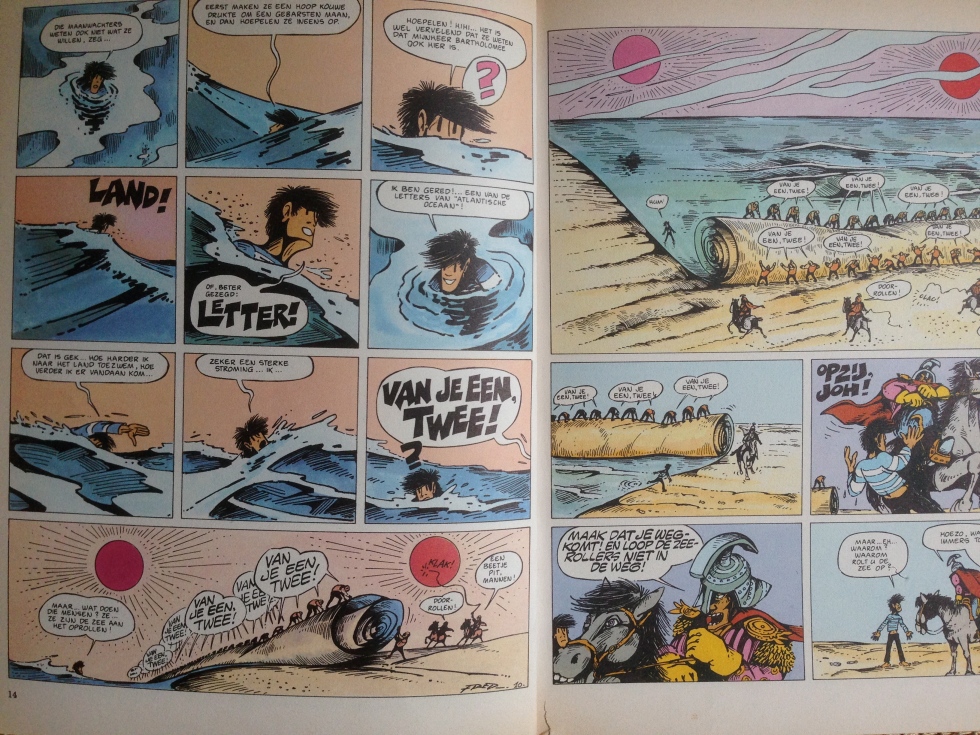 Philémon by Fred, de simbabbad van batbad, Dargaud 1974 (p. 14, 15)
Again illustration and writing is done by only one person. The surrealist environments and plot of the whole Philémon series is unprecedented. It is full of hallucinatory environments and intellectual jokes. On these two pages Philémon is once again, searching for his friend Bartholomee and has been transported by a portal entrance to another realm where the laws of physics are different. We see him swimming in an ocean and he is just as surprised as we, that the water is being hoisted onto a roll, because of the tide change. The tide-changers must do this, otherwise things will not be as organised any more. A literal visualisation of an almost childlike understanding of eb and flood. This specific scene reminds me of such an innocent apprehension of natural phenomenon. An apprehension that is allowed as a landscape experience, but is refuted as a scientific failure of understanding. Landscape experiences are however by definition defying any objective claim to truth, they help us to believe in the impossible and the implausible. Landscapes can, as I am convinced of, muster in any grown-up, a sense of the impossible and therefore inspire to hope and proceed, even if the planet is decaying.

Storm by Don Lawrence (illustrations) and Martin Lodewijk (text), Vandaahl de verderver, Oberon 1987 (p. 10, 11)
This is the universe that Storm (and earthling) has entered after falling into the red spot on Jupiter (as an astronaut). In this second half of the series, he is on the living planet Pandarve. A fascinating version of mother earth. The detailed drawings are realistic and cinematographic. They are full of depth and readable expressions. They are also full of light and shade and reflexion. Allowing the illustrations to be very atmospheric and renderable to the many diverse environments of Pandarve. Here we see Storm in a purple sea, with a living helmet, diving to the bottom. Next we see him in an almost antique earth-like fisher boat, heaving up a harness. Next we see, from a distance perspective the boat sailing towards a very big tree on possibly the only island on this small orbiting water planet, in the interstellar space surrounding Pandarve. And such extreme environmental changes are kept at this fast pace throughout the book. These fantastic changes in atmospheric landscapes make me drool and wish for many future design assignments, to see whether I could match them. 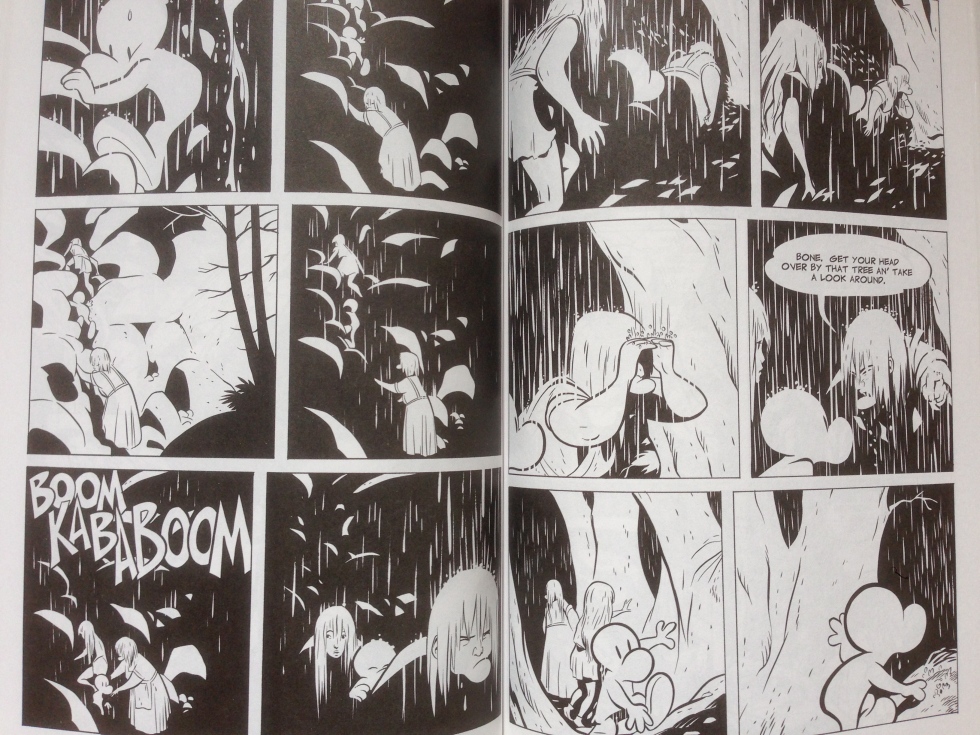 Bone by Jeff Smith, Eye of the Storm, Cartoon Books Columbus Ohio, 1994 (p. 96, 97)
All in black and white and still full of depth and emotions. Bone has fallen into a strange valley where none of his kind live. Instead, there are humans like you and me, engaged in a struggle between good and bad, dreams and reality. In this scene Bone and his new friends flee in a mountainous area. It is dark, it is raining and an occasional lightning makes the place inverse with dark and light tones. There is so much physicality in these simples drawings, so much kinetic storytelling that it reminds me of the mere simplicity of powerful design. And it reminds me, how well rain and nightfall fit landscape experiences.

John Difool by Moebius and Jodorowsky, The Incal of light, Oog + Blik/Les Humanoides Asocies 1999 (p. 30, 31)
Moebius is definitely my favourite illustrator. His use of colour, sharp black outlines, perspective and ugliness is deeply inspiring. Together with the Buddhist/Indian/technology inspired stories of Jodorowsky, about spaces within oneself and extreme biotechnological advancements, these are futuristic plots that matter. Here we see the aristocratic government, warned by a simple police man, coming through the servants entrance. Next we see the police man suffer from a biological virus and finally we see the hero (the metabaron) with the involuntary hero (John Difool) entering. There is anxiety on every page and unbelievable plot changes on every two pages. I cannot imagine how this could become landscape architecture >>> this already is landscape architecture, in a form that is necessary: comic books.

The world of Edena by Moebius, Casterman 1988 (p. 14, 15)
A solo project by Moebius, consisting of four books. The story of Adam and Eve, retold. These two astronauts are lost on a desolate planet. They seem to be the only humanoid figures in a world occupied by dream like creatures and old fashioned Eden conceptions. There are trees, grasslands, insects and animals. There are rich phenomenological aspects to be discovered. This is how I imagine myself in such familiar landscapes, being the first to discover its gifts and secrets. A very refined landscape experience.

The Technofathers by Janjetov and Beltran (illustrations) and Jodorowsky (text), Arboris 1999 (p. 26, 27)
This is a series, inspired by the world of the Incal (see above). We follow the rise of the most extraordinary game designer the universe has ever known. He is tested to match the standards of the techno-community and every time he outwits all his masters. Gaming is a biotechnological feature here, much like in David Cronenberg’s movies (e.g. Videodrome). Hallucinations become real and only a Buddhist clarity can help to survive. The ego is a concept that is needed to be a player of games, but it is an obstruction when becoming the creator of games. Again, brilliant use of colour, perspective, hard black lines and also paintbrush techniques. The plot reveals that great games include challenging landscapes that not only challenge in a sportive way, but also in a deeply spiritual way. Amen.

Begin typing your search above and press return to search. Press Esc to cancel.